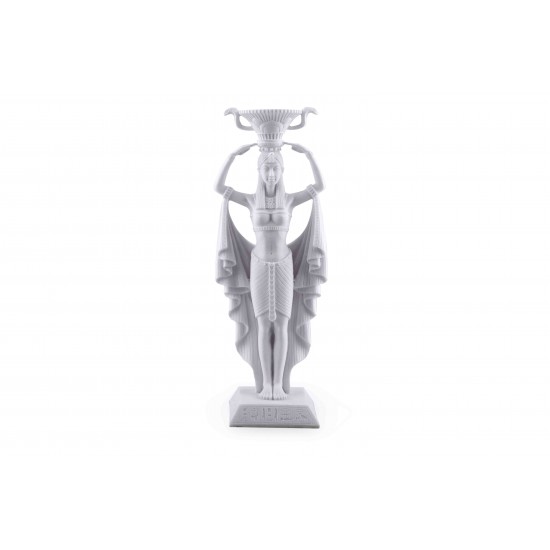 The craftsmanship of this piece is superb as it captures the tiniest details; an ancient Egyptian Noblewoman wearing the plain white gown or sheath dress commonly depicted in ancient Egyptian art held up by one or two decorative shoulder straps. This dress is generally depicted as being skin-tight, but may well have been looser in reality as this would have been very restrictive. Though white was by far the most predominant color, colored threads were sometimes woven into cloth to make stripes.

Exclusive design for home décor, office or as part of a personal art collection

Perfect gift for those who love candle holders.

When royalty, gods, and goddesses were portrayed in statues, temple carvings, and wall paintings, it was the beauty and self-confidence of the subject that was conveyed. Egyptian artistic conventions idealized the proportions of the body. Men are shown with broad shoulders, slim bodies, and muscular arms and legs; and women have small waists, flat stomachs, and rounded busts. Both wear elegant clothing and jewelry and stand tall with their heads held high. Their stately appearance commands the respect of all who gaze upon their portraits.

-9 % Out Of Stock
Luxury Turkish Coffee Set for 6 including serving tray and coffee pot- Gold with crystals
Dazzle your guests with this luxury Turkish coffee set that adds glamour to your tablewareSuitable for serving all kinds of coffee, Espresso, La..
$72.99 $79.99
Add to Cart
Add to Wish List Compare this Product
Buy Now Ask Question
Quickview